Ready Or Not – The Self Driving Car Is Coming to Ontario

Are you ready to relinquish control of your vehicle? Have you thought about the idea of being the co-pilot to a computer while sitting in the driver’s seat of your own car?

Just the thought of not being in complete control when behind the wheel is a tough concept for many Ontario drivers to fathom. Heck - most drivers have a tough time sitting in the passenger seat and letting another person do the driving.

Naturally, there are still many details than need to be ironed about how the technology will impact traffic laws, auto insurance, and responsibility and liability if a self-driving car is involved in an accident. This is being worked on as we speak.

The Future Of The Self Driving Car Is Now 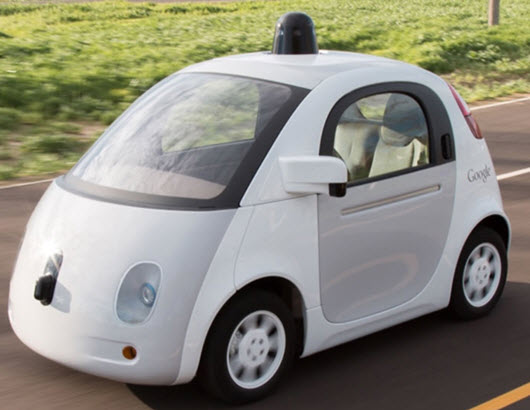 Self-driving cars or fully automated vehicles may seem like a far out idea from sci-fi films like Minority Report, Back To The Future, or Total Recall. Well it’s not so far-fetched at all. This is the new reality we live in : a reality where cars can drive autonomously.

Many new cars already have partially automated features, such as assisted parking and adaptive cruise control. Fully automated driving technology already exists and is being used and tested by many companies and manufacturers.

We’re sure by now that you’ve had the chance to see videos of Google’s self-driving car or at the very least you’ve heard about what it can do. If you haven’t, think about this - Google has their Self-Driving Car Project where they have driven over 1.5 million miles without a driver.

Google is not the only company that is close to having an autonomous vehicle come to market. Tesla has an auto-pilot feature in its Model S car which is being currently being used and other manufacturers are working on similar technology. The automotive technology company Delphi has a self-driving car that successfully completed a 3,400 mile trip across the United States.

What Does Fully Automated Actually Mean?

When people often think about fully automated vehicles they get this vision of being able to read the newspaper while their vehicle gets them to their destination. Not so fast. Think less like the Jetsons and more like a train conductor.

As defined by the Ontario Ministry of Transportation, Autonomous vehicles are “capable of detecting the surrounding environment using artificial intelligence, sensors and global positioning system coordinates.” This means drivers will still be required to pay attention and will have the ability to override the automated when necessary, similarly to a train conductor.

There are, and will be varying levels of automation. One can expect new vehicles to roll out with greater automation capabilities over the next decade or so. There are already vehicles on the road that have automated features such as driver assist, park assist, brake assist and more.

The illustration below from the Society of Automotive Engineers (SAE) gives you a good idea of the varying degrees of automation : 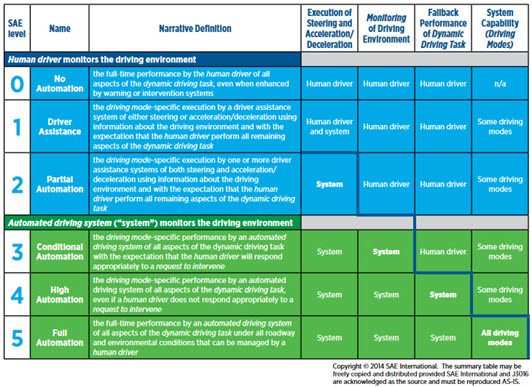 As you can see from the chart, level 0 is what drivers are accustomed to today, and depending on the vehicle you own, you may have some level 1 and level 2 features in your vehicle.

This image from Mercedes-Benz illustrates the types of features that are automated with thier Intelligent Drive technology.

What you can expect in the future is and incremental shift in control from the driver to the cars computer system, with the goal eventually to be level 5 – with your vehicle having complete control over your driving experience.

In the United States, Nevada, Florida, California and Michigan already have laws that address autonomous vehicles and Ontario has recently become the first province to allow driverless cars to be tested on its roads.

There are obviously benefits to the use of autonomous vehicles or they would not have been greenlit by the provincial government. However, many are still unsure as to what fully automated actually means. How is this different from the vehicles that are currently on the road? How will this impact a driver’s role?

How Will Automated Vehicles Benefit Canadians?

There needs to be more benefits than drawbacks of automated cars in order for them to be fully accepted by drivers in Canada. Some of the potential benefits include:

1. Fewer Accidents : Did you know that 0% of vehicle accidents can be linked to driver error?9 This could lead to a cost saving of a whopping $37.8 billion annually.
2. Recapturing Time : While you’re traveling in an autonomous vehicle, you can focus your attention on other priorities – work, connecting with your children, family or co-workers. The Conference Board predicts we could “eliminate five billion hours per year that we [Canadians] spend behind the wheel, worth $20 billion.”
3. Reduced Driver Stress : A fully automated car will take care of driving tasks including monitoring weather and road conditions and handle traffic issues.
4. Increased Mobility For Non-Drivers : People with disabilities that prevented them from driving traditional cars will increasingly have the ability to drive.
5. Reduced Need For Car Ownership : Autonomous cars could change the way we buy/lease vehicles. Being a carless household could result in a savings of up to $2700 annually, according to Vijay Gill of the Conference Board of Canada.
6. Fuel Costs Savings : Fuel costs could be reduced up to $2.6 billion.

What About The Drawbacks Of Self-Driving Cars?

A recent study by the Victoria Transport Policy Institute identified some potential downsides to Autonomous Vehicles including:

1. Increases Costs : Car and road costs may rise because of additional vehicle equipment, services and maintenance. Technology such as road sensors and central monitoring systems will need to be developed to manage traffic flow of automated vehicles.
2. Negative Economic Impacts : There is a potential for loss of employment within the transportation industry.
3. Security and Privacy Concerns : New terrorist or criminal activity, hacking vulnerability, and privacy concerns over GPS and tracking will increasingly be a concern. What happens if the computer of an automated vehicle is hacked? How are these issues going to be handled?
4. Affordability : Affordability may be an issue. Due to the complex technology used, it may be some time before the vehicles are affordable for the average driver: something that may also delay complete integration into society.

Trust Will Be A Key Issue For Adoption of Autonomous Cars


How many people right now do you know that would be willing to give up control of their car? Would you be willing to trust a computer fully? Probably not. Getting use to self-driving cars and having them become a normal part of society will take some time for people to adjust. It is something that will completely change the way we drive.

Just look at how difficult it is for people to adjust to new distracted driving laws. People are still texting and driving on a daily basis. Trusting a computer with your safety and allowing it to do the driving for you is on a complete different level.

The Elephant In The Room - How Does Automation Impact Auto Insurance?

Automated cars will undoubtedly have a big impact on the auto insurance industry. It will impact how rates are determined, the type of coverage offered, and how much you will pay. However, the exact impact self-driving cars will have on car insurance is still unclear.

Automation will change the risk profile of vehicles. Similarly to current vehicle safety features, the more safety features a self-driving car has and level of risk it offers, the more affordable it will be to insure. So, the insurance industry will first need to study the impact of autonomous cars and understand how these new driving features and technology affect driving risk before a clear impact on insurance rates can be determined.

In general, you can expect that higher degrees of autonomy will result in improved safety profiles, which could translate into lower risk of accidents and therefore, lower rates.

Final Thoughts - What Does The Future Hold?

However, whether or not you are in favour of self-driving or fully autonomous cars, they are here to stay and will only become a more prominent part of the auto industry as the technology improves with further testing.

The Ontario government’s 10-year pilot program is a good start to explore the financial, social and environmental impacts of automated vehicles. But, this story is far from being written and you will have to stay tuned to truly see how self-driving cars will change the way we drive.