E-Bike Laws In Ontario And Toronto

Updates To E-Bike Rules For 2021 In Ontario 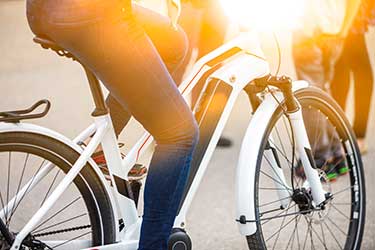 E-Bikes are one of those modes of transportation that fall directly in the grey area of traffic rules. Are they a bicycle or motorcycle? Should they be driven on the road or allowed on the sidewalks?

The most common question we receive is, "What exactly are the rules of the road for electric bikes?" Motorists and pedestrians alike are confused, and truthfully, most people have no idea.

Perhaps you’re looking for an alternative to driving due to rising costs of Ontario car insurance, or you lost your license and need a new mode of transportation. Could e-bikes be the green solution to those who don’t have a driver's licence?

To set the record straight for everyone, we’ve done some research to find out what you can and cannot do when operating an electric bicycle. But first, it’s important to define what qualifies as an electric bike.

E-bikes, or electric bikes, often look like traditional bicycles, scooters, or even small motorcycles. Herein lies the problem – by simply looking at it, e-bikes are problematic to differentiate from other similar electric forms of transportation.

According to the Ontario Ministry of Transportation, electric bikes in Ontario have the following features :

The e-bike should have a proper braking system that comes to a complete stop within nine metres from the point in which they were applied. It is illegal to add any modifications to your electric bicycle to make it faster or more powerful. If you do not meet these standards or ride over the limits, you can face fines.

Do You Need Insurance For An E-Bike?

You do not need insurance, a driver’s licence, vehicle permit, or licence plate to ride and own a e-bike. A driver does need to be 16 or older, wear an approved bicycle or motorcycle helmet, and keep it in good working order.

Michael Vaughan of The Globe And Mail sheds some light on the road rules for electric bikes :

“The Province of Ontario permits e-bikes to be operated like bicycles and, while riders don’t need a licence or insurance, they must wear helmets and these so-called bikes must be equipped with pedals. Since electric bikes are classified as bicycles, they don’t have the same braking and lighting as licensed motorcycles and scooters.”

Where Can You Ride An E-Bike In Ontario?

According to the MTO, you are permitted to ride your electric bike on most residential roads and highways where traditional bikes are permitted. They are permitted to be used on designated bike lanes, and you should follow the same set as rules as a regular cyclists. This includes installing lights on your bike, signalling, and obeying all signage.

You Can Not Ride E-Bikes On :

Are E-Bikes Legal In Toronto? 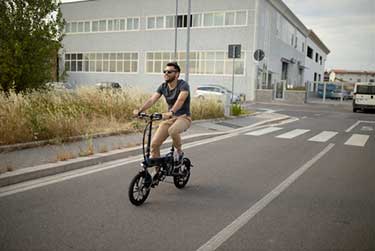 Pedelecs are treated like bicycles in the city, only if they are pedal assisted and require pedaling for movement. They can be used on roads and all types of cycling infrastructure (paths, parks, cycle tracks, painted bike lanes). They can be allowed on ferries to the Toronto Islands if it has a wheel diameter of 26" or larger.

Power-assisted e-bikes operate solely by motor power and are only allowed on roads and painted bike lanes. They may be bicycle-style, scooter-style or moped-style – and regardless of style of appearance, they do not require any muscular power or pedaling to move. They follow all of the laws in Ontario for e-bikes.

As for parking e-bikes in Toronto :

E-Scooters that are standing electric kick-scooters are not allowed to be operated, left, or parked on any public street in Toronto, including bike lanes, trails, paths or parks.

Along with the legal requirements of e-bikes in Ontario, you need to perform regular maintenance tasks to ensure your safety and prolong the usage. Here are some tips to follow :

Under the Ontario Highway Traffic Act, an e-bike is not classified as a motor vehicle. However, under the Criminal Code of Canada, the definition of a motor vehicle includes an electric bike. If you are convicted of operating an e-bike while impaired you will face penalties, jail time, or a suspension.

Pros And Cons Of E-Bikes

E-bikes are an environmentally friendly and cost-effective alternative mode of transportation, but they do have a set of risks. Here is a look at the benefits and potential problems with driving an electric bike.

There are some benefits to electric bikes. They include :

Since electric bicycles are a hybrid of a bicycle and motorcycle, several issues have arisen lately, including :

How Much Are Electric Bikes?

Similar to traditional bicycles, e-bikes come in all shapes and sizes and with many different features. While you can get an electric bike in the $600 range, you are better off spending a little more to get a reliable model. “The cheapest complete electric bikes cost about $600 CDN, while most of the more reputable ones are in the $900-$1,500 range, and the highest end bikes top out at $3,000,” says GRIN Technologies.

If you are looking to try one out before buying it or exploring your purchase options, most cities have a least one dedicated e-bike shop. Do some research for the best electric bike for you or find the closest e-bike store in your area.

What Are The Different Types Of Electric Bikes?

If you are searching for an electric bike, there are a few categories that you can choose from to suit your needs and style. E-bikes come in different styles and bike uses, that resemble traditional bike functions. Here are some common electric bike and styles and classes.

The most popular bikes fit into Class 1 or Class 3 because most riders still want to pedal during their trip.

E-bikes have a maximum speed of 32 km/h in Ontario.

It depends on the circumstances that led to your licence suspension. If your licence is suspended because of a conviction under the Criminal Code of Canada, you cannot legally operate an e-bike. If your driver's licence has been suspended under other circumstances, you should discuss your situation with a licensed legal practitioner before investing in an electric bike.

If your e-bike is more than 120kg, it is not allowed on Ontario roads, and it no longer qualifies as an e-bike. You may then face moped or limited-speed motorcycle licensing, registration and insurance requirements.

If it is designed for more than one person, you can have a passenger on your e-bike that is at least 16 years old. Check the manufacturer’s information to confirm if yours is designed to carry passengers.

You do not need a drivers licence to drive an electric bike in Ontario.

In most municipalities, you are not allowed to drive on sidewalks and bike trails Always check ahead before you plan to use your electric bike on a pathway.

You cannot remove your pedals from an e-bike because it is no longer considered an electric bicycle. It will be an illegal vehicle and you can be ticketed for driving without insurance.

No-Fault Insurance And How It Works In Ontario
What Are The Most Fuel-Efficient Cars In Canada?
How To Buy A Used Car