Self-Driving Cars Are Coming To Ontario

The Inevitability of Self-Driving Cars

If there’s a quote that will get you to sit up and take notice about whether self-driving “robot” cars will ever become commonplace, it’s this quote from an Ontario expert on automated vehicles:

These are the words of Barry Kirk, who is an engineer and director of the Canadian Automated Vehicle Centre Of Excellence (CAVCOE).  In a Globe and Mail article, asked about at a future filled with self-driving cars, he said, “This is the direction the world is going.”

Ontario is getting on the self-driven bandwagon

Earlier this year, it was revealed that the Ontario Ministry of Transportation is setting up a five-year pilot project to determine how autonomous vehicles can be safely integrated with others using the road.

It’s part of what look like bandwagon-jumping initiatives by governments from California to Michigan to the United Kingdom, as different jurisdictions around the world look to become important centres of activity for driverless cars.

With self-driving cars hitting the roads in the UK for testing in early 2015, as reported in The Register, Britain’s minister of science Greg Clark said, “Britain is brilliantly placed to lead the world in driverless technology. It combines our strengths in cars, satellites, big data and urban design; with huge potential benefits for future jobs and for the consumer.”

Robot cars could have far-reaching consequences

While a human backup driver onboard is part of all current initiatives, the eventual phasing out of the need for human drivers could make truck drivers and cabbies obsolete. And with the ability to reduce or even eliminate car crashes, industries like body repair and insurance will be radically changed. 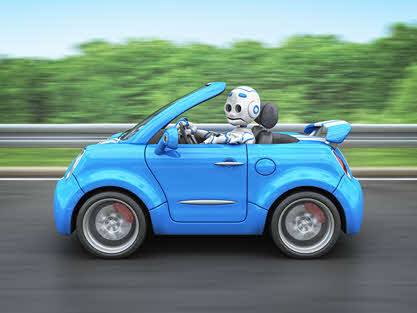 With almost all car accidents caused by human error, taking the human out of the equation could result in significant industry changes. “There won’t be very many claims,” suggests CAVCOE director Kirk. “But there won’t be much revenue, either. There’s not much risk to underwrite.”

Soon, your driving history may not be that important anymore

And what do members of the Canadian insurance industry think should be the determining premium point for driverless cars? In the October 15, 2014 online issue of Insurance Business, a recent poll showed brokers overwhelmingly believe “Location and Usage” should the determining factor. Not one respondent believes that driver history, which is one of the major determining factors in auto coverage today, should be seen as the most important factor.

Surveys show the majority of drivers don’t trust robot car technology, but that may well change, as the evidence continues to pile up that self-driving cars are much safer than those operated by human, prone-to-distraction drivers.

That distrust of self-driving cars may fade even quicker if the introduction of robot car technology is accompanied by a significant drop in premiums.

You don’t need sophisticated technology to recognize that few motivators to change minds are as strong as the opportunity to save money.

Robot cars? If there’s money to be saved, a lot more people will be saying, “Bring ‘em on” in the near future.