What Will Be The Impact Of Self-driving Cars In Canada?

⊸ Blog⊸ What Will Be The Impact Of Self-driving Cars In Canada?

The Future Of Self-driving Cars Is Now 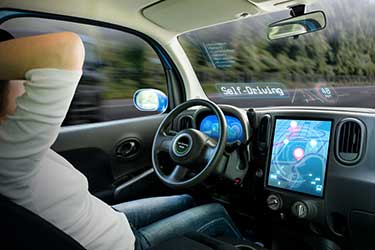 Have you thought about the idea of being the co-pilot to a computer while sitting in the driver's seat of your car?

If there is a quote that will get you to take notice about whether self-driving cars are more than just science fiction, it's this this from an Ontario expert on automated vehicles :

These are the words of Barry Kirk, who is an engineer and director of the Canadian Automated Vehicle Centre of Excellence (CAVCOE). In a Globe and Mail article, asked about a future filled with self-driving cars, he said, "This is the direction the world is going."

Perhaps it is because we are enchanted with technology or looking for solutions to traffic congestion, commuting, road rage, the environment, or even the economy. And we think that self-driving cars are the not so secret answer.

Should we let AI take the front seat for our day to day life? Read on to learn more about self-driving cars in Canada.

What Is A Self-driving Car?

When people think about fully automated vehicles, they get a vision of reading the newspaper while their vehicle gets them to their destination. Not so fast. Think less like the Jetsons and more like a train conductor.

According to the Ontario Ministry of Transportation, Autonomous vehicles are "capable of detecting the surrounding environment using artificial intelligence, sensors and global positioning system coordinates." This means drivers will still be required to pay attention and will have the ability to override the automated when necessary, similar to a train conductor.

There are, and will be, varying levels of automation. One can expect new vehicles to roll out with greater automation capabilities over the next decade or so. There are already vehicles on the road with automated features such as cruise control, parking assist, and brake assist to name a few.

The science behind a self-driving car lies behind the AI. Radar, cameras and LiDAR (light detection and ranging) work together to be the eyes on the road to detect objects distance and speed. There are five levels of self-driving cars :

What you can expect in the future is an incremental shift in control from the driver to the car's computer system, with the goal eventually to be level 5 – with your vehicle having complete control over your driving experience.

Who Is Developing Self-driving Cars?

It is not only tech companies that are researching and creating driverless vehicles for our roads. Automotive companies are also getting involved with new vehicle features and fully autonomous options. These companies are leading the way in real-world testing :

This company began as the Google Self-Driving Car Project in 2009. They have driven 32 million kilometers (real world) and have created their sensors from the ground up. In 2015, they created an entirely self-driving cars with custom steering and braking – without a steering wheel or pedals, that passed a test drive with a blind man. Now, they are operating fully driverless rides within Waymo One in Arizona, California and Michigan.

Elon Musk's Tesla is one of the few manufacturers not using LiDAR – they created their unique version. Tesla uses ultrasonic, radar, and 2D camera devices to enable the car's autonomous abilities. They have more than 600,000 vehicles on the global road and are continuously researching ways to have fully driverless cars on the road.

These are only the top three companies gearing up for driverless vehicles. Apple, BMW, Audio, Lyft, Uber and Volkswagen are a few honorable mentions.

Are Self-driving Cars Legal In Canada?

In Canada, the only province to allow driverless vehicles in Ontario. As of January 2019, driverless cars are allowed on Ontario roads. Participants in Ontario's automated vehicle pilot program can test driverless cars on public roadways but under strict conditions. BlackBerry's QNX, Magna, Uber and the University of Waterloo (creators of the Autonomoose) are currently testing ten vehicles, but are not yet using fully driverless, yet. When the cars are available, the government says they will be allowed on Ontario roads.

How Will Self-driving Cars Affect Insurance?

Automated cars will undoubtedly have a significant impact on the insurance industry. It will change how premiums are determined, the types of coverage offered, and how much you will pay. However, the exact impact self-driving cars will have on insurance is still unclear.

Many vehicles now come with semi-automated safety features. However, the question of a policy being impacted by a driverless car is undecided. Once these vehicles become industry standard, automation levels will determine pricing to reflect the level of automation. This could remove traditional risk factors such as driving history and age.

Another concern is who is to blame for an accident - does liability still rest in the driver's hands, or does the manufacturer take the blame? Liability laws will evolve to ensure autonomous vehicle advances are not stalled.

In general, you can expect that higher degrees of autonomy will improve safety profiles, translating into a lower risk of accidents and, therefore, lower rates.

A recent survey found that 46% of consumers do not trust self-driving vehicles. There have been accidents from Tesla and Uber, which have resulted in fatal accidents on public roads.

As technology improves, so will the safety of driverless vehicles. Developers of these vehicles say they can reduce 40,000 fatalities every year. Until then, no amount of data can replace safe driving behaviours from a driver who is focused and aware of their safety and those around them.

Advantages And Disadvantages Of Self-driving Cars

Here is a look at the pros and cons of driverless vehicles :

On average, a self-driving car could generate up to 100 gigabytes of data per second. Where will that data go?

There are some concerns about how self-driving cars will affect privacy. Most models will track sensitive data which includes real-time location information, fingerprints, and eye scans. There are concerns that this data can be sold to third parties for advertising – over time the technology will build a profile for you that fits the types of places you shop and eat at and paid ads make take place over organic searches.

As driverless cars improve their technology, cyber security will play a role in how people adopt the cars.

Ontario is the only province that allows for driverless vehicles to be tested on public roads. There must be a passenger in the car or a remote operator monitoring the car.

Accessible and affordable driverless cars could increase the number of kilometers driven each year. Transportation related climate emissions could skyrocket if the vehicles are powered by gasoline.

If vehicles are powered electronically and paired with a clean electricity grid, transportation emissions will lower. If ride shares begin to use driverless cars, it could enable more shared rides, reducing emissions.

Autonomous cars can see what is on the road because of radar, cameras, and LiDAR. These three features work together to provide the robot with superhuman vision by providing the car with visuals of its surroundings to help detect 3D shapes and objects' distance and speed.

The Tesla Model 3 with Autopilot's full self-driving capability costs around $40,690. Research shows as more manufacturers release driverless cars the price will hover around the average car price but more expensive options will be available.

Not all self-driving cars will be electric, and some will be gas hybrids. Ford is planning on launching autonomous vehicles by 2022 and will offer hybrid electrics. However, GM is aiming for "Zero emissions. Zero Crashes. Zero congestion." Tesla is also focusing on all-electric programs for their fully self-driving cars.

Final Thoughts - What Does The Future Hold?

However, whether you are in favour of self-driving or fully autonomous cars, they are here to stay. They will only become a more prominent part of the auto industry as the technology improves with further testing.

The Ontario government's 10-year pilot program is an excellent start to explore the financial, social and environmental impacts of automated vehicles. You will have to stay tuned to truly see how self-driving cars will change the way we drive.

Car Accident Reporting And What Do After You've Been In An Accident
How Much Does It Cost To Own And Drive A Car?
Selling A Car In Ontario?